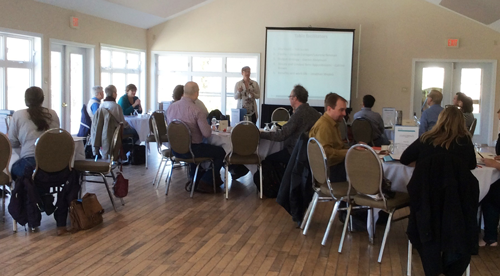 Over the past few months, the DFA Bargaining Team has been preparing for the upcoming round of negotiations. As we move into the final stages of preparations, we wanted to introduce you to the Bargaining Team that will be working hard on our behalf at the negotiating table in 2020.  We have created a 37-second video introducing you to each member of our Bargaining Team.  Enjoy!

Fighting BAC! If BAC were a research paper, would you pass it?

The December 2019 issue of News You Can Use is available here.

Faculty Salaries - How does Dalhousie compare?

Please click here for a DFA report comparing Dalhousie salaries to those of the national, regional, and U15 comparator groups. We also look at Dalhousie salaries in terms of inflation (consumer price index) and the Income Maintenance Change (IMC) negotiated with the Board through collective bargaining.

The DFA has received a response to our letter expressing concern about inaccuracies in BAC Report LIX, as well as discovered that BAC Report LIX has since been altered and reposted. The DFA President has again written to the Interim President (dated November 19, 2019) to reiterate our concern about the quality of information and the survey being distributed to the university community in advance of BAC Consultations.

Another Operating Budget Surplus for Dal

First, congratulations on your new position as Interim President. We look forward to working with you in that role until Professor Saini arrives in January.

With that in mind, this letter is addressed to you as the current President and the Provost who will be in charge of drafting the budget in early 2020. You may not know that the DFA and others have been concerned for some time that budgets addressing deficits are drafted and then, shortly afterwards, surpluses are announced. This year the surplus was $6 million, more than enough to erase the .5% BAC cut applied to all Faculties in the 2019-20 Operating Budget and allow a reversal of other austerity measures.

Because the surplus is announced after the Operating Budget is developed, there is no opportunity for a transparent and collegial process. The BAC discussions are retroactively compromised because of inaccurate information, and there seems to be no process through which the Operating Budget can be amended in light of a surplus to reduce or eliminate the BAC cut to Faculties that, every year, means that faculty have to do more with less while students pay more to get less (larger classes, fewer course options, fewer staff to support them, etc.).

The DFA noted six years ago, in a detailed report on Dalhousie’s finances, “The preliminary budgets always predict a deficit, sometimes very large, even though each year returns surpluses, sometimes substantial ones at the same time academic units are told to cut back. Money is being diverted from the academic mission to capital expenditures” (iii; https://immediac.blob.core.windows.net/dfawebsite/images/2019/pdfs/iamdal/dfareviewdalhousiefinances.pdf). This year, as announced in the public portion of the June 25th Board of Governors meeting, only half of the surplus is being directed to academic spending. According to BAC numbers, 62.4% of the budget goes to Academic Expenditures (BAC 68, p. 2). We all know how math works: if only 50% of the surplus goes to Academic Expenditures, $744,000 less than 62.4% of $6m, then the overall share of university spending directed to the core mission of the university will once again decrease.

The percentage decrease may be small, and we’re aware that the different naming of various budget pieces may complicate this picture. But our ongoing concern is the trend: the Academic Responsibility Centre gets a much smaller share of the overall University budget than it did fifteen years ago (nearly 74% in 2002-03), Faculties’ budgets are cut every year, with sometimes significant ERBA variables that undermine long-term planning, while our student body grows and there is increasing pressure to admit more PhD students and secure more research funding.

Dalhousie is the smallest university in the U15, achieving much for the region and the country despite its limited size. But trying to maintain academic excellence while shrinking resources year after year after year is a losing proposition—for our students and our faculty, and for Nova Scotia.

We encourage you to consider a formal process for ensuring that surpluses are, as a matter of high priority, directed towards erasing BAC cuts to Faculties and so supporting our students’ educational experience and the research mission of the only U15 institution in the Atlantic region.

DFA's 2019-20 Executive Committee took office after the AGM on Tuesday, May 7, 2019.  For a listing and contact information for our Executive members, click here.  Thank you to the following outgoing Executive for their service and commitment to our membership: Darren Abramson, Darren Abramson, Jason Brown, Melissa Helwig, Susan Holmes, Nancy MacDonald, Kalyani Prithiviraj, and Deborah Tamlyn.

Earlier this week, the DFA submitted this message to Dalhousie’s Provost and Vice-President Academic Dr. Teri Balser.  We have made similar submissions in the past but this represents our first opportunity to engage with Dr. Balser on the topic of the university budget. The Board's budget rhetoric often highlights the increasing costs of employing people to do the work of the institution. Academic staff compensation is often explicitly or implicitly identified as a "problem" that justifies, at least in part, perennial increases in student tuition. This is misleading, and only serves to divert attention away from the real problem. Our analysis shows that the dominant trend has been an increase in compensation costs for non-academic staff and the diversion of operating funds to back capital projects such as new buildings. In other words, increases in student tuition have been used to fuel the bloat of central administration and to erect new buildings, while the academic staff at the front-line of the university's academic mission are forced to do more with less every year.  Since 2010, annual BAC cuts have led to a cumulative cut to Faculty budgets of more than 20% while enrolments have grown. Now that the building boom is nearing completion, it is time to reinvest in teaching and research - we need to reverse the trend of cuts to academic unit budgets.

Please take a moment to read our submission – it is important for all of us to understand the university’s budgeting process and financial practices as they impact our ability to deliver on the academic mission of the university.

DFA Letter to Board Chair Larry Stordy re: Interim President of Dalhousie

This letter to the chair of the Board of Governors reflects the DFA's ongoing concern with the lack of open collegial process in appointing senior administrators - a concern echoed by colleagues across the country. Our collective voice and scholarly expertise should be respected in such important decisions. The principle of collegial governance is enshrined in our Collective Agreement and we will not stand by and watch it erode.

As a Medavie Blue Cross subscriber, you are now able to submit health claims via a mobile app.  Details available at https://www.medaviebc.ca/en/members/medavie-mobile.