Academics here in Canada have fought for and largely won the freedom to pursue their scholarly and research interests – and communicate the results of their research — without fear of reprisals or discrimination. At Dalhousie, these rights are clearly stated in the collective agreement between the DFA and the Board of Governors.

But this is not the case in many other countries around the world, and a Canadian academic is sitting in an Iranian jail as a result.

Homa Hoodfar, an internationally renowned anthropologist who teaches at Concordia University in Montreal, was in Iran to visit family and pursue her research, which deals with gender, culture and development in Middle Eastern societies. Born in Iran, she holds Canadian, Iranian and Irish citizenship.

In early March, just before her scheduled departure from Iran, the Counter Intelligence Unit of the Iranian Revolutionary Guard raided Dr. Hoodfar’s residence, and confiscated her personal computer, phone, and passports. After summoning her for several long interrogations, they released her on bail but denied her the right to leave the country. Since then, Dr. Hoodfar has been subject to more than ten grueling interrogations without the presence of a lawyer. After she was called for yet another interrogation on June 6, she was incarcerated at the Evin prison in Tehran. 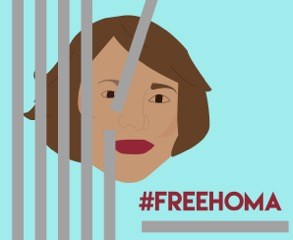 While there have been no official charges against her, Canadian observers believe her incarceration is directly related to her research, particularly with regard to gender issues. Her niece, Amanda Ghahremani, was quoted by CBC Radio as saying that Iranian authorities believe her aunt was “fomenting a feminist revolution in Iran”, an accusation Ms. Ghahremani said is “baseless and not grounded in any fact whatsoever.”

The Canadian Association of University Teachers, faculty associations in Canada and around the world, (including the DFA) and Amnesty International are all calling for Dr. Hoodfar’s immediate release. Dr. Hoodfar’s situation has also attracted the attention of the Canadian media, including the Montreal Gazette, which published a June 21 editorial in her support. Given that Canadian and Iranian authorities are in the midst of talks aimed at re-establishing diplomatic relations between the two countries, it is hoped that pressure from Canada could have some impact.

In the meantime, the case of Homa Hoodfar gives us pause to think about how fortunate we are to live in a country in which academic freedom, freedom of expression and human rights are respected in principle, if not always in practice. And when principle and practice conflict, we have recourse to our unions, our human rights commissions and our courts. When we travel outside Canada, that is frequently not true, as Homa Hoodfar’s situation clearly demonstrates.